My thoughts and feelings on the third Belfast Bloggers Meetup

In the spirit of being a 'Belfast Blogger' I guess I should write down some thoughts on my first time attending the Belfast Bloggers meetup. It took place on 22nd July at Farset Labs.

I left before the end, but it was an excellent night so I figured I would pen some thoughts.

Sorry to all the real writers and bloggers out there that are reading this - I am a developer but I do try! 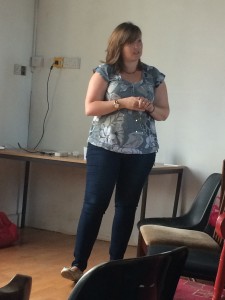 First up was Dawn, after asking everyone in the room to do a brief intro and discuss what they wanted to learn about blogging she took us on a tour of some of the questions we should be asking ourselves to see if we should even be blogging in the first place.

Assuming we should be blogging (I think it is safe to say everyone there was up for it!) she talked us through the basics of what you would need to get set up both technically and in terms of how you should be thinking about generating content.

What I found most interesting about her talk was when she discussed how controversial headlines whilst not brilliant for SEO can generate discussion and clicks. A more newspaper like approach. This is something I have always stayed clear of (maybe because my WordPress SEO plugin shouts at me!). 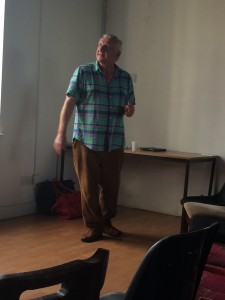 Next up we had Willis who talked about the use of video online.

The talk started off by citing some stats about the future of video on the web, the gist of it being it has nowhere to go but up.

Next on the agenda was talking about video editing tools, Willis believes that the future of video creation is cloud based editing solutions (One such service was We Video). This makes a lot of sense since a lot of us are generating content on machines that may well struggle with intensive video editing tasks.

The final section of his talk was on the problems with turning videos interactive - with blog posts we can have links, comments, sharing options, all that good stuff, videos have none of that unless embedded into a page that has that. Of course you could let a bunch of hackers loose on your video. 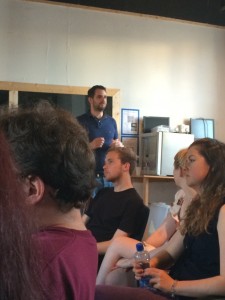 Last but by no means least we had Joel. Joel spoke of the different projects he has been involved in and continues to work on and what he has learnt throughout his journey.

I really enjoyed his talk, he mentioned needing to stay genuine to yourself, how he treats social media and blogging as part of the same thing and perhaps most importantly for me he mentioned that if you aren't writing about what you care about you probably won't see it through.

This resonated with me and immediately made me remember all the dead blogs I have created and half finished projects. In the future I need to make sure I am fully invested in the idea and not just the execution of an idea.

My apologies for the poor picture of him, I wasn't sitting in a brilliant spot to snap a pic! To make up for it I will include a bonus picture of one of his slides! 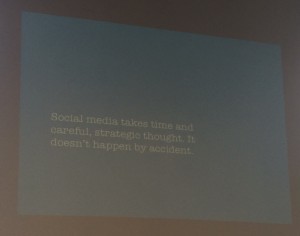 Here is a picture of just some (it all wouldn't fit into one picture) of the pizza that was kindly donated by Four Star pizza. 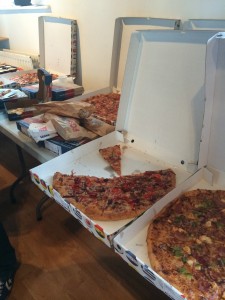 Just for folk that attended or interested in those who attended, here are the twitter accounts of the folk that were there. Sorry if I have missed you out, just comment and I will add you!