This creep thinks it's okay to approach women on LinkedIn

And I bet he isn't the only one.

What I am about to share are screenshots taken by my wife from unsolicited LinkedIn messages from David Stewart. This isn't the first man to contact her on LinkedIn for a less than professional reason and I am sure she isn't the only woman on LinkedIn getting these messages.

Messages which have left my wife feeling grossed out (her words) and are making her consider changing up her LinkedIn profile to try and dissuade wankers (my words) from posting inappropriate content. What a sorry state of affairs that people have to try and tailor their online presence so as to not get creepy messages.

Starts off innocuous enough, although like I mentioned these were unsolicited. 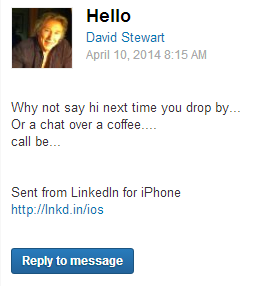 Another unsolicited email a couple of days later;

Not happy with no reply a hours later he now makes a dirty remark about 'intensive care' (my wife is an intensive care nurse). He also makes reference to her appearance. 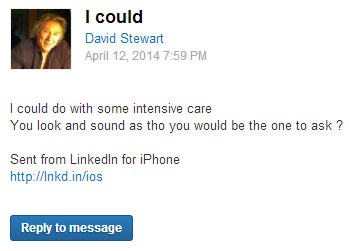 He has already been reported to LinkedIn and I believe blocked now, but you have to wonder how many other people he has contacted this way and how many he has made to feel uncomfortable.

This type of behavior is disgusting and the people that do it need to be called out publicly (hence this blog post).