An interview with frontend developer Derek Johnson. We cover all things, well, frontend

I briefly met with Derek at a Build workshop last year and have been a big fan of the work he is putting out and his work curating the HTML5 Gallery, so I was glad when he accepted my offer to interview him for my site. 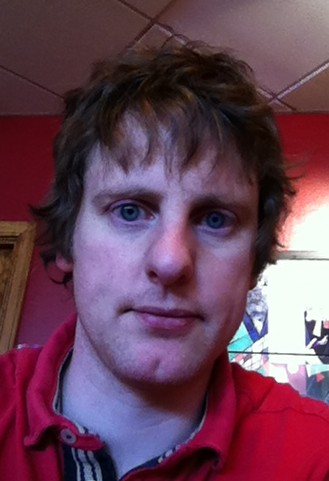 Tell us a little about yourself, what you do and who you work for?

I live in Co. Armagh with my wife Keyara and our three children. We are expecting our fourth child at the end of April.

I work at Website NI in Benburb, Co. Tyrone building websites for clients throughout Northern Ireland. I am especially interested in HTML5, responsive web design and mobile friendly web development.

I'm also one of the co-curators at html5gallery.com a showcase of sites that make good use of HTML5 and related technologies. We are always looking for new curators if anybody can lend a hand BTW.

If someone wanted to lend a hand with HTML5 Gallery, how do they get in touch?

How did you get into tech and more specifically web development?

I started fairly late in life and I'm not your typical geek - at school I hated computers and would have gone out of my way to avoid them. On top of that I've always been crap at video games. So crap that I've never managed to clear all the little dots from the first level of Pacman. When I left school I traveled a bit and eventually settled in Scotland where I worked as a forester by day and in bars in the evenings to supplement my income. I loved forestry but the industry was shrinking after tax breaks disappeared and wages were low.

Reluctantly I decided that I was going to have to learn how to use a computer if I was to move up in the world, so I enrolled in a basic computer course at a local college. There were modules on Microsoft Office, communication, C++, networking and UNIX, all of which made me yearn for the excitement of watching magnolia emulsion dry on Winter grass while it grew over my feet, apart from one - web design.

I thought it was absolutely amazing that I could make this thing (in FrontPage at the time) that would go on the web for anybody to see. I still clearly remember how magical it felt to create and click on a link from one page to a different page and back again. I was hooked (and remain so) and spent as much of my spare time as I could learning and building. I wasn't able to finish the course as it didn't pay the bills, but I made my first paid site soon after that for a forestry contractor and charged £70. I was over the moon.

I kept at the part-time freelance while working in other jobs, moving to Northern Ireland, getting married and having children until I eventually landed a full time job at Website NI just over three years ago.

What are you finding yourself working a lot with at the moment?

Responsive design. Clients are asking us if they can have a mobile site or native app, and when we sit down with them to get a handle on their needs what they are actually describing are cross-platform websites. Thanks to the blinding ray of light Ethan Marcotte shone on us all in May 2010 we can now help with that.

The types of sites we build are usually content managed and/or e-commerce. It's very rare for us to build a straight up static brochure site these days.

Ahh FrontPage - I was a Dreamweaver boy myself, anways, Who or what are your biggest influences?

Ethan Marcotte's responsive web design as I've already mentioned. It is a combination of three fairly simple technologies, but the underlying philosophy is a strong one and I believe it will define the coming era of front end web development in the same way Jeffrey Zeldman did with web standards.

Another big idea that influences the way I work comes from Luke Wroblewski. In May 2011 I attended the Mobilism conference in Amsterdam where he gave his Mobile First talk. Afterwards he was having a twitter conversation with [Jeremy Keith](/jeremy-keith-interview/) about "content first" and in one of his tweets he said API first was more inclusive than content first. Being a bit dim I didn't know what he meant but was lucky enough to bump into him in the bar and asked him, and he was kind enough to explain it in baby steps for me. Without that talk and that short conversation I would still be flapping about doing the web design equivalent of putting a motorbike helmet on arse first.

A year or so ago I would have told anybody who listened that responsive design and client side feature detection were the answer to everything, but now I think they're only part of the answer to a smaller number of problems. I'm starting to adapt things on the server more now because cheaper and older devices often don't live up to the promises they make via feature detection. It's a very new thing for me but it can't be ignored as device fragmentation is, well, very fragmented. That's a good thing by the way - the further we move away from excuses to create illusions of control the better, because we don't have any.

What we do have though is progressive enhancement and the opportunity to build our knowledge of the device landscape as described by Stephanie and Bryan Rieger. For the rest of 2012 I don't think I'm likely to read, watch or hear anything as useful as Stephanie Rieger's Pragmatic Responsive Design and Bryan Rieger's Adaptation talks they gave at Breaking Development Nashville last year.

Benburb is a quiet but thriving village set in idyllic countryside, and there is an amazing amount of creativity about the place. There is a potter, painter, basket weaver, woodworker and sculptor all working and creating in Benburb. I think it rubs off on us a bit even though we are technology and they are traditional.

I don't think that's the prosaic answer you were looking for however,[Toby's note - it wasn't ;-)] so I'll give you that now! My main machine runs Windows 7 and I use Sublime Text 2 as my text editor and Opera as my development browser. Our test suite includes an iMac, a Windows 8 laptop, a couple of old £40 XP laptops with native IE6-8 installs, Kindle, iPad, iPhone, Blackberry Curve, Nokia 5800, HTC Hero, Galaxy S2, O2 XDA and a Sony Ericsson something or other. I also use a Windows Phone emulator and the indispensable Opera Mobile emulator. I do as much guerrilla testing on friends and relatives phones as I can too.

That is a nice array of test machines. How do you try and keep on top of current tech / development news?

Twitter, RSS and conferences are my weapons of choice. I curate my twitter following list and RSS feeds quite tightly (maybe too tightly) but I read all of it.

Conferences are slightly different in that you don't get knowledge that isn't necessarily available elsewhere, but the connections and conversations lead to so much more in the long term that they make the price of a ticket a bargain. I remember thinking after Mobilism that if I was to blog about it I would write about the people I met and conversations I had, and put the notes on each talk into an <aside>

What is your biggest bugbear at the moment?

It's a cheap shot and mean spirited to set up a "WTF look at these fools LOL" tumblr, or to tweet a link to a site that could do with some work. We should remember that nobody sets out to create bad apps, sites or experiences, and that everybody has to start somewhere. The usual advice given to folk starting out is to put their work online and let people see it so more experienced folk can critique it and show where things could be done differently. Public humiliation was never part of the deal.

Everyone I've met online and offline who does this job loves it and does the best they can within the constraints provided by their budget, knowledge and experience. Let's act like we're part of a community not a class system.

How can people get in touch with you?

Twitter @derekjohnson. There's a blog in the pipeline with a few draft posts done, but no definite launch date yet.

Is there anything else you would like to add?

Pay attention to the recognized experts in our industry. They aren't self-appointed or loudmouths or bluffers. They are well known because they have put the hours in and come up with the goods.

Also, if something's not working fix it by opening your mouth to declare it broken.

Thanks so much for Derek for taking part in the interview - you should definitely follow him on Twitter and I wish him all the best in the future (especially with the new addition to the family!)

Why I moved from OmniFocus to Reminders

Getting Obsidian word count on iOS